How do operations work on this track plan?

How do operations work on this track plan?

Hi,
I'm looking to start a new layout, and I have a first draft of a track plan which I have based off of Burton Latimer's (Northamptonshire, Midland Railway, Midland Mainline) goods yard from the 1950s. I'd like to know more about the sort of operations and moves that might have taken place.

My question is, how would the various sidings have been used, and what would be some prototypical shunting moves?
Especially: how would the "Up Sidings" have been used? At one end they connect to the goods yard, and at the other, they become the branch line to an Iron Stone quarry. I initially thought they might have been used as a runaround loop for a loco bringing wagons from the quarry, but as they are labeled "Up sidings" in the original diagram, I imagine they had a more general use.

Era: 1950s/60s BR Late Crest
For the layout track plan, I have adapted Burton Latimer's track plan, making it only double track, rather than two double tracks (goods and passenger lines), I have also excluded the Weetabix Mills' tracks. 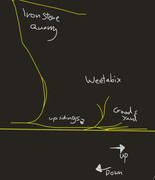 Wider view of Burton Latimer, showing the Iron Stone branch line. Screenshot from Rail Map Online. (Does not have the detail of the diagram.)

Thanks for any thoughts and ideas.
Top

Something one needs to know is right up to the late 1970's on some lines in the UK (Narrow gauge) and certainly through the 1950's and in some places later than that (Standard gauge) horses were used for shunting, and a horse had some big advantages in that it had traction on steep gradients and it could be uncouples and avoid getting trapped in sidings. Horses were so well used that at one point it was rare to have locomotives used to shunt wagons on both standard gauges and narrow gauge lines. It wasn't until block working of trains became more popular under the Beeching plan to save costs that run round loops with revised trackplans were used to avoid shunting that horses were eventually abandoned.
A second means of shunting by both horses and locomotives was by rope and capstan. With a rope wagons could be moved on parallel lines with the loco heading in the same direction. With a rope and a capstan, wagons can be shunted in the opposite direction to the direction the loco pulls at.
Rope and capstan shunting was often done in difficult locations where wagons needed to be moved in situations where there was not room to provide run round facilities.

Remember that locomotives were not allowed to run into goods sheds.

I am not saying the information I have just written applies to your track plan or not, but I thought it would be of interest to mention it.
Enjoying freelance modelling in 7mm narrow gauge Feel free to ask questions relating to the Mountain Goats Waggon & Carriage Works thread.
Top

Thanks for that info Mountain Goat.
Top

You might like to take a look at some of the notes I have posted in response to your "operating and signals" topic of a couple of years ago... I slipped up about the dates...

I did wonder how you had apparently gone from this question to the layout there...

However, some of it might be useful and/or of general interest.
As to operating this (apparently) goods only (maybe with through passenger workings) layout...
The question is almost impossible to answer from a "real railway" perspective. Perhaps you are looking for info on automatic model stuff... I wouldn't have a clue on that.
Top

Also quite common that a yard was shunted by trains running in one direction. I would suggest a down train would shunt the goods yard while siding A was probably for crippled wagons etc from the limestone quarry. The up sidings and quarry being served by up trains.
Top

Like all things modelling, a compromise has to be made between real railways operations / signal placements or track/point placement etc as space is not avaialble for the real thing to be modelled. Frequently compression and omissions or incorrect placements have to be made