Two simpler boards completed this morning and only three points involved.
But I’ve obviously done something wrong along the way so it’s back to fault finding mode.

Update: I was obviously in 'muppet mode' this morning - completely forgot to connect the points common wire across the corner board. Doh! 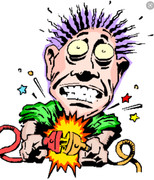 I simply cannot believe that he could possibly have made a mistake........ever!

Seriously Steve - your doing a great job. Barry
Tomorrow will be a good day!
Top

When I wire up my layout, just one circuit and some sidings nothing worked. Moan moan mumble mumble etc.

The secret is that it really is good practice to attach the power feed from the controllers to the bus. Works a treat then.
Nurse, the screens!
Top

And I will doubtless make some more tomorrow.

And I will doubtless make some more tomorrow.

Still finding mistakes from yesterday. Too busy to make new ones.

Update: I think I have sorted out the electrical issues - all around swapping wires on the polarity switches. I’ve run a small loco across three complete boards and have one piece of track in the station to adjust. At the moment the loco wheel runs up the switch rail causing the front wheels to derail. Probably only ‘out’ by a couple of mm.

Further update: And now I'm starting to regret recycling some old Seep point motors. Now I've always been happy with them, after all the main function of throwing the points is fairly bulletproof. Yes, I know the built in switch is unreliable which is why it will eventually only be responsible for the mimic board lights.
But the thing that is really frustrating is the hardened steel actuating rod - there are only fourteen motors and this afternoon I was trimming the pins to length with side cutting pliers. Five pins completely fell out of the motors, two of them never to be seen again along with the small spring that forms the switch.

Your efforts are professional grade. Myself, two wires and I'm all in. Your track work, particularly in that junction, is breath taking. I do hope you could post some video, or direct me to a link.
Top

This last week has been a bit of a slog but this morning the last few droppers were connected and all the boards joined up and bolted together.
The result was the first complete laps under DCC power (all testing to date has been with a DC controller). No major issues but a significant period of testing is needed to iron out any bugs - the good news is that there are no track shorts and all the points work although some adjustment of a couple of them is likely to be needed.

I do need to spend some time thinking about the fiddleyard and how the branch lines feed back into the mainlines while still leaving some space for storage sidings. Other tasks on the to do list is to rough out some foam blocks to infill around the bridges, fit the LEDs to the control panel (when they arrive) and cut the main structure for the platforms once the track is tested and adjusted.

The platform is likely to be 18mm ply screwed to the baseboard but the platform walls and coping stones will need some careful planning as there isn’t a straight line anywhere through the station.
On Low Ghyll I bent Peco platform walls to shape but this time I’m giving more consideration to casting my own in resin - the advantage being that resin can be quite malleable when put in hot water, allowing it to be shaped to the curve of the platform prior to glueing in place and painting.

Chops, yes I will sort out a video in due course.
"Not very stable, but incredibly versatile."

Just when I thought I would have a rest from soldering. Managed to work out a way of joining up the various tracks at the back of what will be a small fiddleyard. Quite a few droppers to connect to the bus wires tomorrow. For the time being point control in this area will be ‘digital’ but point motors will come once the fiddleyard sidings are decided.

Well, if you don't end up electrocuting yourself, I shall look forward to it. Very complex scheme going on.
Top

I have stuck to a strict colour coding for the wiring but I still managed to reverse two droppers on the last point I put in on the fiddleyard area. Quickly corrected and running testing has begun. Already had to tweak a couple of board joints and discovered one siding without droppers that is also the wrong side of an insulating joiner.
And just as I was thinking I would have a break from soldering, a parcel of LEDs arrived from China - a month earlier than forecast.

The good news is that two locos and a couple of carriages are running on the up and down tracks - so far without hitting each other on the curves.
"Not very stable, but incredibly versatile."

Users browsing this forum: No registered users and 5 guests