I'm returning to model railways after 12 years. I'm looking to create a corner "L" shaped design so as to minimise space needed in my flat.

This diagram is based on N-guage using first and second radius although i might go for 2/3 instead if I have enough room.

Please add comments. This is only my first thoughts. 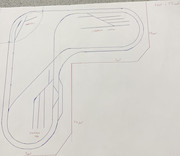 I am interested in the quarry idea. Usually quarries themselves would have standard gauge feeders which were either loaded by small industrial narrow gauge affairs, or they would in more modern times be loaded by modern diggers etc. (Various equipment from the humble JCB to a convayorbelt system... It varies. As long as it works and gets the minerals into the wagons quickly and efficiently, they use it!)
Narrow gauge railways employed in quarries had track which was portable so they could move it to where it was needed at the time. Many used standard track sections which were layed by hand and relayed to wherever it was needed much like we do today if we use sectional track with a trainset. The most common size used was 2ft or thereabouts, because horses could fit between the rails, or waggons could be handpushed. Waggons were usually of the small 2 ton types because they could easily be pushed by hand if required. They did try 3 ton in some places but it required two people to push so were less popular. You can start to see why quarries found narrow gauge feeder lines more useful. Also in a boggy or muddy enviroment, using rails can be an advantage as they float on top rather then sink in the mud like road vehicles do, though most quarries would simply fill in the muddy areas using rocks and stones.
Getting the raw materials to the standard gauge wagons was one job. Putting them into the wagons was another issue to overcome. With small narrow gauge waggons one just shovelled it in like one does with a large wheelbarrow. Not practical with standard gauge larger wagons, so there is lots to think about.
What I do like is about the quarry idea is it is a perfect excuse to hide the main running line in a tunnel as your plan shows, and the standard gauge tranfer line in can be left at baseboard height. One can buy some short lengths of Z gauge track to represent a narrow gauge feeder line, or get a portable or a more elaborate fixed convayor belt system? Or some sort of top gravity feed system? Plenty of choice.

I apologize for only looking at one small area. I am getting carried away!

I'm thinking a cable and a hopper over the track maybe. It'll be a stone quarry, and the track up will be above the base board. If I've more room I could develop the corner mountain further out and have the track running into a mine or something interesting.

The main line is designed to run under the mountain.

The other feature of this layour is the second running line performs a figure of eight so should create an illusion of size if two trains are running, as they'll go in opposite directions for half of the circuit.
Top

Yes. I noticed that (The figure of 8 design). It makes it interesting.

I've just got to be careful with polarity. That section can't connect to the outer ring e.g. With a set of points, as the polarity is reversed.

Has anyone used the Peco ST50 or ST51 crossovers? Are they okay for a main running line?

Back in the day some points etc. had a habit of tripping up trains / stock but I'm hoping modern ones are a little better?
Top

Added a third line and another station. 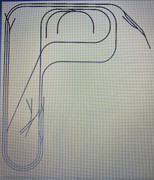 You seem to have two cross overs on the top left of the layout. My first thought is that is an unnecessary complication, especially in a potentially hard to get to location. I had one cross over on my previous layout and had endless issues with certain locos and coaches derailing. This was eventually solved by only running them anti-clockwise.

Many times the wrong train took me to the right place.
Top

Are these crossovers (as already suggested above) or is there a raised section going over the curved line?

Unless you're building your own track then crossovers as the type shown don't come ready made.
Top
Post Reply
11 posts

Users browsing this forum: No registered users and 4 guests