The Shankly and Gdynia Railway

In post 295 I mentioned that I had put railings around the top of my coaling tower and also added the ladder, so time for some photos...

I mentioned in post 300 that I rather like the postman standing and holding his bike (waiting for the level crossing gates to open), so I took some photos of him from various angles today. The figure is actually a Dapol / Airfix railwayman from their CO12 Station Accessories pack, but his outstretched arm holds the bike very well. Of course, I removed the original small base and added my own. The bicycle is Model Scene from their Bicycles and Rack pack. I only put two into the rack, so I could use the other two elsewhere on the layout.

Waiting for the Gates to Open

The beer barrels came from a child's railway set, which might explain their large size, that I bought for £7. The cream-coloured rendered building at top right in the third photo in post 302 also came from this set. Of course, I had to repaint them.

Given that the beer barrels are waiting for collection across from Arkwright's Mill, they reminded me of an article that I read about beer and the industrial revolution. The article posed the question of why the world's first industrial revolution happened in the UK. It mentioned that the traditional factors that historians think allowed this to happen (supplies of coal, iron ore and surplus labour) were present in many places at that time. It proposed that what was unique about the UK was the British habits of drinking beer (alcohol being antiseptic, but not too strong like wine or spirits) and tea (naturally antiseptic and requiring boiled water). The article claimed that this allowed the filthy, over-crowded urban areas to be largely free from the water-borne diseased that ravaged other non-beer-drinking, non-tea-drinking cultures. Who said history is boring?

Lovely photographs of an excellent model railway, one that I follow with great interest.

An interesting hypothesis as to the Industrial Revolution, I had always felt that perhaps there was a concentration of really bright and clever people concentrated in the UK. It was Bryson that commented that Britain, by the numbers, was responsible for more inventions and scientific advances than any other nation in recorded history.

In Central America, the Mayans were building unbelievably large and numerous pyramids, circa 1000 BC, and demonstrated an extraordinary degree of engineering genius. Yet for all that, beyond, perhaps, log rollers, they never created a wheel. Granted, they also lacked domesticated animals to pull a wheeled vehicle.

During the building of the American Transcontinental Railway, Chinese coolies were blasting granite through the Sierra Nevada mountain range whilst a largely Irish navvy's toiled across the Great Plains, the latter periodically subject to Northern Cheyenne, Sioux, and Arapaho raids. The Irish, and other European immigrants, largely drank water from a common source and a common tin cup, and died in droves from Typhus, and other water borne disease, whilst the Chinese boiled their water for tea and rice, and everything else was sauteed and enjoyed comparatively good health. The coolies also had the unenviable task of working with nitroglycerin, to ill effect.
Top

I read somewhere that the working gangs that built the railways were mostly all immigrants of Chinese Irish Welsh And some English. According to the article I read,The Chinese started a Chinese Take away, the Welsh started a choir, the Irish started a fight and the English just hung around waiting to be introduced.

Puddles
It does not take me long to do five minutes work.
Nostalgia is not what it used to be.
Top

. Fact is, El Paso did have a thriving China Town that specialized in laundry and Chinese cuisine, as well as sundry other businesses. Some of those fellows became rather wealthy. Many other Chinese communities suffered rather badly from xenophobia in those times of 1880's, but El Paso was spared. One historian posited that El Paso was a rather tolerant community because back then it was so damn hard to get to that if you were there you were generally accepted for having survived the journey.
Top

Hi Chops and Puddles,
I like Puddles' joke about the English hanging around waiting to be introduced.

Regarding Chops' comment about the concentration of bright people in England/Britain, I've got a second-hand theory about that as well - in the context of factors why industrialisation happened in Britain first. The theory is that the British aristocracy and landed gentry were open to the idea of making money from the new opportunities that industrialisation offered. This was in contrast to the ruling classes in other places who looked down on such enterprises and were content to live on their agricultural income as their ancestors had done for millennia - thus missing their chance. In Britain most people with the good fortune to own land that had iron ore or coal in it or that was situated where a railway, turnpike or canal was needed, were happy to employ an engineer to organise and manage the business. The landowners didn't actually need to get their hands dirty, so they did not stand in the way of progress. Instead, they sat back with a cocktail in hand and let the money roll in. Now that is what I call clever.

While we're on the topic...

Scenes from the Industrial Revolution

Charming views. Interesting theory. Why then would the landed Gentry and aristocracy in Britain be any more predisposed than say those I the rest of Europe?

Hi Chops,
You've posed an interesting question. I've been pondering it all day. Here are two possible theories.
1. Back in the early 19th century, few people in Europe lived in nation states. Most lived in empires and were subjects, not citizens. Perhaps there was more distance between the ruling classes and the ruled, who rarely spoke the same language. This kind of society would be more likely to be fossilised in its social attitudes and behaviour.
2.The agricultural revolution in Britain at the end of the 18th century created a new class of landed gentry - newly rich and keen to rub shoulders with the old money. These ambitious fellows would be a class that the 'old money' guys would have to deal with - and perhaps compete with - and presumably learn from. They had a shared interest in maintaining the status quo, so they would be naturally draw together and exchange ideas.

As well as exercising my brain today, I also managed to run some trains and my daughter joined me playing with the figures on the layout. Very pleasant. I didn't take any photos, but here a few quite recent ones. 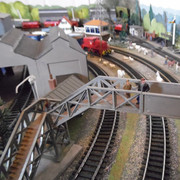 Delightful images. Your daughter will be blessed with happy memories for a lifetime. Interesting theory. Makes about as much sense as anything could. The UK track record for intellectual and technological revolution is pretty well there to be seen, from Newton to Stonehenge, from Stephenson to Darwin. Certainly many great minds spanning the millenniums in other parts of the globe (but not mine), but there is a undeniable concentration upon this island.
Top
Post Reply
351 posts

Users browsing this forum: No registered users and 11 guests