For all model railways and railway modellers
https://modelrailwayforum.co.uk/

by PBoland
Well it has arrived https://youtu.be/kMCTgvxpRc4 with a tale to share!!
Opened the parcel, great, removed loco and the front truck (bogie) fell out followed by 2 bits of plastic

. Don’t panic, retrieved all the bits and figured out what was what. The small location pivot clip at the top of the motorised unit had broken and fell away, anyway managed to do a temporary fix, which I feel, will be permanent.
Contacted Walthers and to my surprise they were not interested, it was a manufacturers problem, Kato, to deal with. Contacted Kato and replacement clip on its way, thank you very much Kato (USA). Just need some coaches now or should I say cars.

Thanks, going through these now, odd that an awful lot come back with out of stock. Luckily I have access to an American home address.

by Chops
I find myself envying my British cousins for the close relationship they have with their passenger trains. Though from what I glean, that might be a love-hate relationship. It would be about 33% less to pour petrol on my cereal than milk, so we drive everywhere, even if to cross the bloody street, on this side of the Atlantic.

No wonder Americans are so fat. That being said, if one peruses American layouts, you may be surprised to see a dearth of passenger service. North Americans typically do not model passenger service, either from the golden days, and much less the present. If one does see a fleeting passenger train, it is like a trespasser skirting its way among yards of goods wagons. I did find one, 1, link to a majority passenger consist based here in N.A., and I cannot recollect ever having seen one like it for or since in the last five decades, or so. Now that I go an Google it, I found at least half a dozen. Here is TrainBrain's effort, and the fellow even has catenary, though unstrung as yet:

By contrast, most British layouts, great and small (and still great), boast numerous passenger trains, depots, halts, platforms, and fiddle yards, the latter teaming with coaches. Bottom line, I shall be following your thread with great interest. 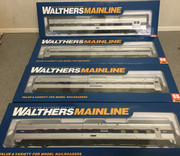